Locked Away Forever, A Growing campaign against Juvenile life sentences

The Case Against Juvenile Life Without Parole
By Pat Arthur and Brittany Star Armstrong
At 16, Sara was tried as an adult and sentenced to the rest of her life in prison, even though the California Youth Authority (CYA) determined that she was "amenable to the training and treatment" they offered. 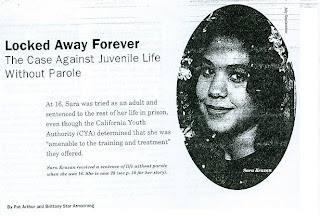 Sara Kruzan received a sentence of life without parole when she was 16. She is now 28


There are more than 2,000 child offenders serving life without pa­role (LWOP) sentences in United States prisons for crimes committed before the age of 18. The United States is one of only a few countries in the world that permits children who commit crimes to be sentenced to prison forever, without any possibility of release.2 Only eight states in this country — Alaska, Colorado, Kansas, Kentucky, Maine, New Mexico, New York, and West Virginia - and the District of Colum­bia prohibit life without parole for youthful offenders.

Unfortunately, adolescents. like adults, commit horrible crimes and make terrible mistakes. And, like adults, they should be held account­able — but in accordance with their age, stage of development, and great­er capacity for rehabilitation. A sen­tence of life in prison is excessively harsh for such young people, many of whom were themselves victims of abuse or neglect.
An estimated 26 percent of ju­veniles sentenced to prison for life were convicted of a felony murder, that is, for participating in a rob­bery or burglary during which a co-participant committed murder, in some cases without the knowledge of the teen.3 Fifty-nine percent of youth sentenced to LWOP are serv­ing time for a first-time offense.4 In 26 states, the sentence of life with-out parole is mandatory for anyone, even a juvenile, who is found guilty of committing first degree murder.

The disproportionate use of this sentence on youth of color is extreme. Nationwide, black youth are sentenced to LWOP at a rate 10 times greater than white youth. In California, 158 of the 180 people serving LWOP for crimes commit­ted before the age of 18 are youth of color.6 Black youth in California are 22.5 times more likely to receive a life without parole sentence than white youth.

Juveniles sentenced to LWOP frequently receive ineffective assis­tance of counsel during pre-trial and plea proceedings, and at trial and sentencing. For example, a federal district court judge in Washington state found that Donald Lambert, who at the age of 16 plead guilty to aggravated first degree murder and received a mandatory life sentence, was not provided constitutionally adequate representation. Never­theless, Lambert is serving life with­out parole at the Walla Wall State Penitentiary in Washington state. The Ninth Circuit Court of Appeals rejected on technical grounds the grant of habeas corpus relief by the district court. A juvenile sentenced to LWOP in Michigan in 1989 for felony murder describes his representation this way:
" I did not see my attorney at all. I called his office and no one accepted the calls. He never vis­ ited me. I never had any kind of interview about the crime, I never even talked to him about the crimes. I seen him one time at a hearing that lasted about 5 minutes, then I seen him twice IN THE COURT ROOM at trial that was a two day trial and then I seen him moments before I was to be sentenced. When I seen him before the sentence it was in the bullpen behind the courtroom and he told me there that Id be getting natural life. I kept asking him when I'd be going home, but another inmate explained it all to me. He never asked me if I even did the crime. I didn't know anything about the law or that he was supposed to come and see me during the trial. I went through a murder trial at the age of 15 with out ever talking to my attorney.”

In other legal contexts, youth are not treated as having the same capacity as adults. For example, they are not considered responsible enough to en­ter into contracts, to vote, to marry.
or to leave school. Yet, in most states, they are presumed as fully respon­sible as an adult for purposes of the criminal process - they can plead guilty, go through complicated legal proceedings, and be sent to prison to die - without regard to their age and diminished capacity.

A Growing Campaign to Stop Sentencing Juveniles to Life Without Parole
In light of the recent recognition by the U.S. Supreme Court that juve­niles should not be held to the same standard of criminal culpability as adults 12, the elimination of juvenile life without parole sentences is be­coming an increasingly important subject of juvenile justice reform. Children's advocates, faith-based groups, human rights advocates, ju­venile justice experts, families of ju­veniles serving LWOP sentences, and even the victims of serious crimes have joined together in voicing their disagreement with the use of LWOP to punish youth who "are not yet the persons they will become."14 The ad­vocacy is supported by growing pub­lic opposition to the use of LWOP on juveniles. A poll conducted of Ameri­cans on the West Coast found that 86 percent disagree with the idea that children who commit crimes are so beyond redemption that they should be locked up for the rest of their lives without any opportunity to ever earn their release.

Litigation and legislative efforts to eliminate juvenile LWOP sen­tences are underway and in various stages of planning in several states, including Michigan. Illinois, Penn­sylvania. Louisiana. California and Washington state. The Colorado legislature just recently enacted a law that eliminates the future use of LWOP sentences on juveniles.. In Mississippi and Washington, the NAACP Legal Defense & Educa­tional Fund. Inc. is focusing advo­cacy and research efforts on the ra­cial disparities in LWOP sentencing. The Juvenile -Justice Committee of the Criminal -Justice Section of the American Bar Association is working on a proposed Bar Resolution regard­ing juvenile LWOP.

The media are paying greater attention to this unfair sentencing practice. Media coverage is provid­ing more complete portraits of the juveniles who have been sent to pris­on for life.1'''
Internationally, many are work­ing to call attention to the use of LWOP sentences to punish juveniles in the United States, a practice that violates the Convention on the Rights of the Child, the International Bill of Rights, and the International Cov­enant on Civil and Political Rights. The sentencing of youth to life with­out parole was included in a juvenile justice resolution adopted by the Hu­man Rights Commission in Geneva in 2005. Human Rights Watch has made submissions calling for the elimination life without parole sen­tences for juveniles to the Committee against Torture, the Human Rights Committee, and to the UN Secretary-General's Study on Violence against Children. A petition has been sub­mitted on behalf of child offenders sentenced to life without parole to the United States Inter-American Court on Human Rights showing how this cruel sentencing practice of violates principles of international law.18.
All involved in the campaign to stop the sentencing of children to die in prison are deeply motivated by the life stories of these truly discarded children and believe deeply in their capacity for rehabilitation.

Pat Arthur is a senior attorney at NCYL, specializing in juvenile justice reform. Brittany Starr Armstrong interned at NCYL in summer 2006 as an Arthur Liman Public Interest Fellow. She is in her first year of law school at University of San Francisco Law School.

National Coalition to Ban Life Without Parole for Youth Offenders

As part of this initiative, NCYL and other advocacy organizations are working to eliminate life without the possibility of parole as a sentencing option in California and Washington State for youth who commit a crime while under the age of 18.

NCYL is also part of an effort to create a national collation for coordinating advocacy to ban this sentencing around the country. The advocates in this coalition take heart in the U.S. Supreme Court’s decision in Roper v. Simmons, 543 U.S> 551 (2004) because it acknowledges fundamental differences between adults and children that make egregiously harsh sentencing disproportionate and unnecessary.

The disproportionate use of this sentence on youth of color is extreme. Nationwide, black youth are sentenced to life without parole at a rate 10 times greater than white youth.
Posted by FFUP at 12:41 AM